This post find the top startups in LA based on total amount raised from Venture Capital firms and looks at some of the newest startups in the LA area that have raised millions of dollars.

Los Angeles is the second largest city in the United States by population. The city itself is surrounded by more cities. The total population of Los Angeles is about four million; Los Angeles County has a population of closer to ten million! The Port of Long Beach is an essential trade and transit point for most of the Western United States. Hollywood is still the entertainment capital of the world. Many celebrities and movie stars live in LA but in this post I'd like to look at the LA tech and startup scene.

📈 How do you define tech company or startup?

I'm defining startup and tech company rather broadly. We live in a time where software is eating or has already eaten large sectors of our economy. There aren't any clearcut definitions of what makes a company a "tech company" or a "startup". Paul Graham famously defined a startup as having the potential for massive growth. For this post I'll use the Supreme Court's definition of pornography to define startups and tech companies: "I'll know it when I see it".

For this list I'm only looking at startups or tech companies that have their Headquarters Location in Los Angeles County and in Irvine, CA because it's another startup and tech hotspot in SoCal 🔥.

If you'd like to see all of the companies in our database, filter, sort and search please create an account or login.

Here's a map of the startups in Los Angeles: Created this map with Mapbox Studio!

We have over 1,300 companies in our database that have headquarters in any of the above cities. Since it's not helpful or practical to list out that many companies in a blog post I'm going to pick my favorites. Specifically I'm looking at the Total Investment Amount, Founded Year and indistries the companies are active in. I hope that this list will be helpful to job seekers and other people interested in exploring or learning more about the Los Angeles tech scene. Again, to filter, sort, search and explore the FULL DATASET please login to the Employbl dashboard.

Without further ado, here are tech companies and startups in Los Angeles broken down by the top companies in various categories.

💰 LA tech companies that have raised the most money 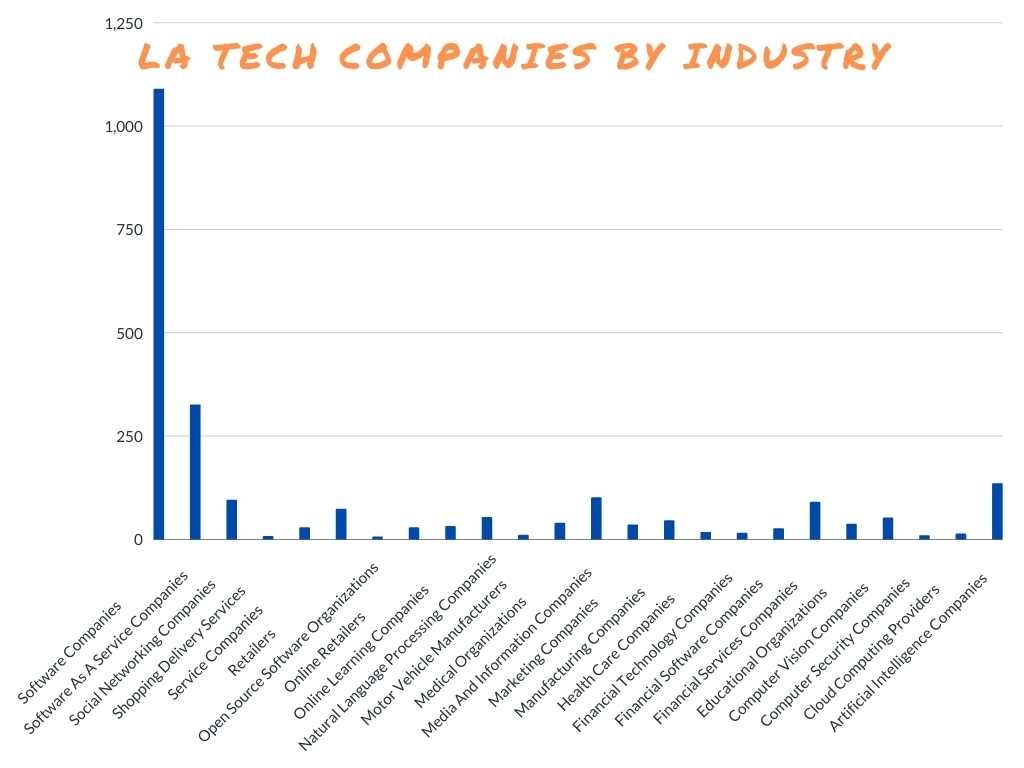 What better way to find out who's starting up than to look at when they started? This list looks at companies founded recently. The pandemic thoroughly shook up our economy, makes sense that some of these brand new companies can be looking to cash in on the new economic order of things. These companies were all founded in 2020 or 2021. Click on the company name to view more info about each startup!

Welp, hopefully that provided a good introduction to some of the newest and best funded startups in the LA tech scene. I realize that all the data in a static list can be hard to sort through, which is why we've built the Employbl dashboard to filter companies and startups based on criteria of your choosing. Login to give it a try. Did you like this list? Any startups we missed? Features you'd like to see on the platform? New cities to explore? Send me a tweet!.