The H-1B is a temporary non-immigrant visa. Someone that comes to the USA on an H-1B visa can stay in the country for three years and renew it once for a grand total of six years.

In a previous article we explained what the h-1b visa is and who the top H-1B employers are. There were many of the top tech companies in Silicon Valley and some of the biggest firms on Wall Street like JP Morgan, Bank of America, Google and Facebook. The biggest companies in the United States clearly benefit from the H-1B visa program. Check the raw data for the previous article in this Github repo. 🤓

In this article we’ll explore how major US companies utilize the H-1B immigration system and contract work to their advantage.

If you’re a startup in Silicon Valley hiring is probably a big challenge for you. One of the major concerns startups often voice is that they have to compete with big players like Google, Facebook, Apple and Netflix that can offer ridiculously high salaries. One way companies deal with that is by hiring remote US and full remote offshore teams. The big tech and financial companies that run the economy hire legions of contract workers in addition to their full time workforce to ship the products, technologies and financial services that we use everyday. A recent article in Fortune titled Not a Googler: The Secret, Frustrating Life of a Google Contract Worker dives into how the Google machine utilizes temporary workers. The article introduces a contract worker placed by the recruiting firm Vaco to work onsite at Google.

More than half of Google's workers are temporary, vendor or contract staff, known as TVCs.

The article argues that this has created a two-tiered system at Google where many contractors do not feel in control of their own lives and are treated inferior to full time employees despite doing similar work. When a recruiting firm places a contractor (or TVC) at Google there are various arrangements the deal can take. Many contractors are billed hourly and for every hour the contractor works the recruiting firm gets their cut. In this arrangement Google pays the recruiting agency and the recruiting agency pays the candidate. The contractor works for the recruiting agency, they don’t work for Google, despite working on Google’s products. In some cases Google might pay the recruiting or consulting agency to complete a large project. The firm will then hire and employ many people to get the job done, taking their cut--whatever it may be. In all cases the contractor (or TVC) gets paid by a third party and Google is not liable to treat them like an employee. Large tech companies can treat people differently if they do not employ them. Uber, Lyft and Instacart have pioneered the use of gig economy workers on a large scale. Throughout the tech industry the two-tiered system of contract and full time laborers is very prevalent, with many third parties raking in huge profits from the system as it currently stands.

Even within Google there doesn’t seem to be an official directive about their stance on how to treat contractors:

Contract work and the US Immigration system

Recently CBS News published an article Who is Cognizant, the tech services company behind Facebook's latest scandal?. Cognizant happens to be #1 on the list of number of Labor Conditions Applications (LCA) filed last year. The LCA is the form that’s required to submit before a company can sponsor a candidate via the H-1B visa program. Google and Facebook file their fair share of LCAs too and sponsor candidates via the H-1B visa program. 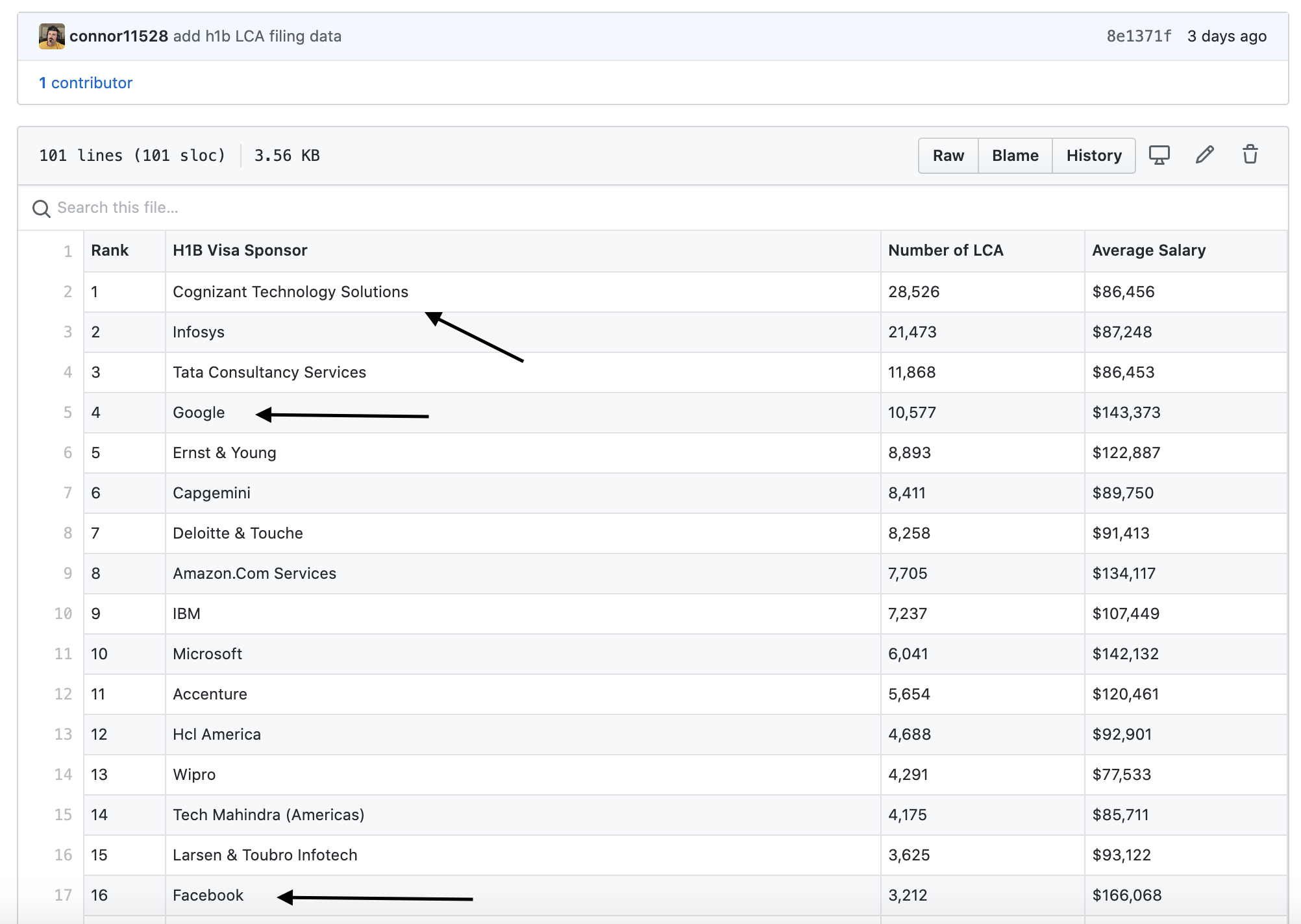 Cognizant and Accenture are two of the many tech services providers Facebook employs to do routine work.

Contracting is already a precarious position to be in. Nearly by definition the employment is temporary. Many of the people you work with are not your “actual” co-workers. Different companies employ different people working on the same projects. Coming here from a different country where your visa is tied to an employer and being a contractor adds extra volatility to the mix. Contractors are easier to expend than full time hires.

The H-1B is a temporary non-immigrant visa. Someone that comes to the USA on an H-1B visa can stay in the country for three years and renew it once for a grand total of six years. It’s possible for H-1B visa holders to transition to Green Card via EB-1, EB-2 or EB-3 visa programs but it is very difficult. Each year twice as many people apply for Green Cards as are granted, compounding the issue and backlog. Many workers decide to return to their home countries and start businesses there even before their visas run out (article: The homecoming of H-1B rejects is turning India into a new land of opportunity
. Employing immigrants from other countries on a “non-immigrant basis” is one way tech companies build products and offer services. Employing people as contractors reduces liability for the company. Tech companies don’t need to provide health insurance or other benefits to employees working for them on a contract basis. The employment categorization can last for years without companies ever having to hire the worker full time.

Companies like Google and Facebook enlist recruiting agencies to find individuals. Full time employees of the tech giants interview candidates that recruiting agencies provide. The full time employees, Hiring Managers, decide to accept or reject candidates. When the role open is a full time role the company extends an offer to the candidate and the candidate decides to sign for an annual salary. The recruiting agency has an agreement up front with the company called a Master Service Agreement (MSA) that dictates their fee. It’s normally 20-30% of the person’s first year salary as a one time payment. This lump sum is the end of the transaction. Most MSAs specify that the candidate needs to last three months to a year to qualify for the full fee.

If a recruiting agency places a candidate on an 18 month contract at a tech company the agency needs to put the contract on their payroll. Though the candidate will be going to work for the tech company every day they will technically be employed by the agency that found them. As a comparable example, if the candidate expected the same rate of pay of $130K to do the work that would equate to about...

This isn’t a fair assessment though. When contractors don’t work they generally don’t get paid. Additionally contract workers may have to pay for health benefits etc. Therefore to take home the same real amount of money the candidate might be asking for closer to $75-80 / hour to perform the same hypothetical job as the full time employee that makes $130K. Therefore the recruiting agency would bill an hourly rate of maybe $90-110 / hour to the tech company to cover their fee and the contractor’s hourly rate. This arrangement would go on for the life of the contract. On a similar placement though, if the contractor did work every hour of the year for 18 months (hypothetical) at a bill rate of $90 per hour…

In this example the $43K profit made off the contractor is considerably more than the $26K a recruiting agency would make off of a full time placement. Additionally the revenue is recurring and more predictable than sporadic one time sums. There’s a clear incentive for recruiting agencies to make contract placements at tech companies, though it does require additional bookkeeping since they host the contractors on their own payroll.

The H-1B program allows employers in the United States to temporarily employ foreign workers in occupations that require the theoretical and practical application of a body of highly specialized knowledge and a bachelor's degree or higher in the specific specialty, or its equivalent.

More info about temporary visas in the US Temporary worker visas last a fixed period of time; they expire. An H-1B visa is valid for three years and can be renewed once. That means that a foreign national can stay in the USA on an H-1B visa for a maximum of six years.
Eligibility requirements and more details about how to apply are outlined here. 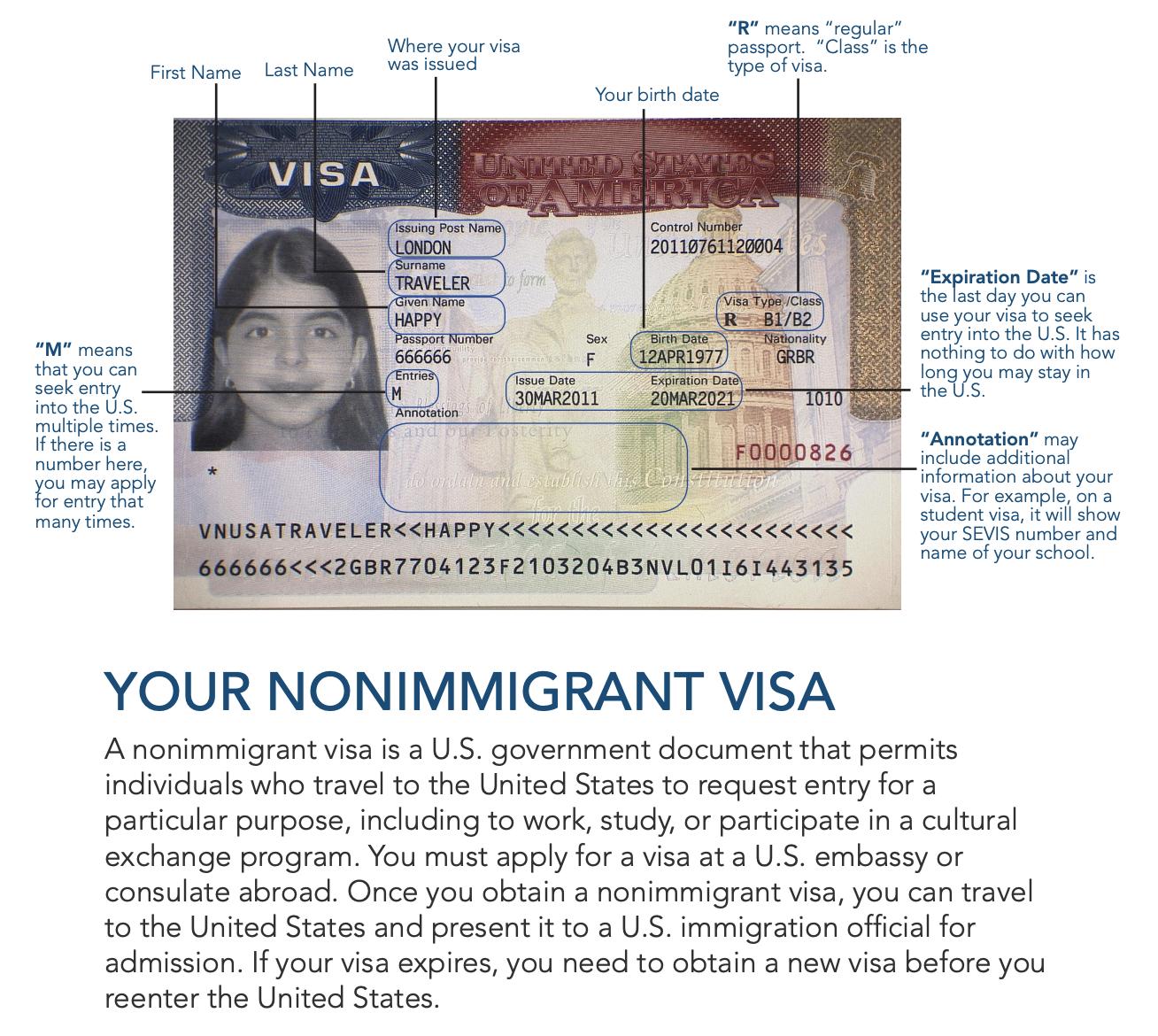 Protections while working in the United States

There are Rights and Protections for Temporary Workers, established by the US government. Your employer cannot take action against you for asserting your rights, regardless of immigration status.

You Have the Right to:

The full pamphlet describing these rights is listed here.